Culture and ethics in the financial sector

Financial institutions, particularly banks, have a very important function in society. The push for maximum profit for shareholders at the great players from the mid 90s has led to a culture of superiority, short term profit, taking excessive risks, developing and selling of complex financial products and the distribution of high fixed rewards and bonuses to bankers. 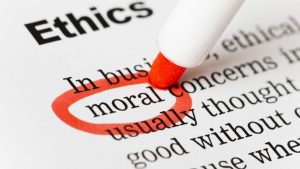 In the United States, Lehman Brothers went bankrupt in 2008 and eventually a large number of banks where propped up by the US with billion dollar loans . As Goldman Sachs has been saved from bankruptcy by a billion dollar injection and Freddy Mac and Fanny Mae have been taken over by the U.S. Government. In Europe, member states invested more than € 1.6 trillion in banks that threatened to fall.

In the Netherlands ABN AMRO had to be split up and nationalized, and ING, AEGON and SNS Reaal received State aid to be upheld. In addition, DSB went bankrupt and the Icesave drama led to much mistrust of consumers in the financial sector.

As a result of the financial crisis a social discussion started about the functioning of the banks. The crisis has damaged confidence in the banks. In order to restore confidence in banks, the Banking Code (Code Banken) was drawn up by the Netherlands Bankers’ Association (NVB) in response to the report entitled ‘Restoring Trust’ (‘Naar herstel van vertrouwen’), which was published by the Advisory Committee on the Future of Banks (Adviescommissie Toekomst Banken) on 7 April 2009.

The Dutch government has also drafted a package of 40 measures to address the problems and vulnerabilities in the financial sector. This approach focuses on the protection of consumers and the focus of their interests, the greater stability of financial institutions and strengthening the supervision of the financial sector.

Taking recent incidents, such as the LIBOR scandal, into consideration, the key question remains whether this has led to a real culture change in the banks resulting in self awareness and sense of importance of having a highly effective Compliance & Ethics Program in place.